one in the Paris region at Gennevilliers (92) and two in Marseille (one in the heart of the Silo de la Madrague, 50 metres high, built in 1928, and the other at St Just in the 14th arrondissement). It was born out of a great tradition of semolina mills in Marseilles which, at the very beginning of the century, brought together around a hundred mills specialising in the crushing of durum wheat. The restructuring and mergers that took place in the sector between 1950 and 1975 greatly reduced the number of mills, since there are now only five durum wheat or semolina mills in France. 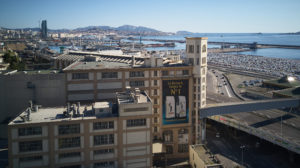 In 1973, a new mill integrates the Semoulerie de Bellevue area: the Sainte Marie mill, located in the La Montre factory. In order to expand the factory, Panzani buys the Silo de la Madrague, next to the Littoral factory. It is a silo whose wheat comes directly from the Autonomous Port of Marseille. The mill of Sainte Marie is destroyed and the capacity is transferred to the mill of the Littoral (300 T/day).

In 1961, Panzani merged with the company La Lune then with Régia Scaramelli, which allowed to integrate the Semoulerie Bellevue of Saint-Just in Marseille. Panzani then developed a new activity, that of semolina manufacturer, and was thus able to fully control the sector and the quality of its products.

The Marseille sites are experiencing a revival of activity with the consumption of semolina which developed in the 1960s with the arrival of a large population from North Africa (mainly Algeria) in France.

The Bertrand et Cie establishments, founded in 1835, had a production unit in Le Havre including mills and two pasta factories which were completely destroyed after the bombings in 1940. In 1949, the company had a semolina mill and a pulp mill rebuilt on land it owned in Gennevilliers along the Seine.

This factory has been operated since the 1970s by the Semoulerie de Bellevue where durum wheat is processed to produce semolina. The wheat is delivered by barges but also by trucks.

The Semoulerie de Bellevue sees its perimeter strengthened with 3 mills and a silo.

On 1 November 1999, Semoulerie de Bellevue merged with the Panzani company.

In 2019, the “Semoulerie de Bellevue“, internationally recognized for its ability to offer a wide range of semolina, couscous and durum wheat flours adapted to the needs of the food industry, changes its name to “Bellevue Ingredients & Solutions“.